When I was a kid, this is something that my mom would make on special occasions.  Bourguignon de Boeuf, also known as Boeuf Bourguignon or Beef Bourguignon...which ever that you like to call it, it is one of my favorite dishes!  This is a big hardy meal and is a typical meal for central to southern parts of France for Sunday, holidays or special gatherings.  It does take some work, but it's well worth it.  As in most French cooking, the prep work is the time consuming part, the cooking tends to be rather simple.  Prepare all the ingredients before you start cooking, you should be able to go from step to step without having to do additional prep work along the way.  This should be done in a heavy Dutch oven, cast iron style pot...like Le Creuset oven.

For the recipe for the Bass Family Beef Bourguignon...

My mom used to make tomato salad as a side for dinner all the time.  I made this as the first dish I ever served Tiffany when we first started dating.  It is very simple, but very good.  Use the best fresh tomatoes you can find.  Heirlooms are great, but romas or just about any hot house medium size fleshy tomatoes will work.

For the recipe for the Bass Family Tomato Salad...

We found out we both had a love for Dill Pickles when we ate for the first time together at Carnegies Deli in Las Vegas, and they placed a giant bowl of dill pickles in front of us at our table. We ate through the whole bowl of pickles before we even placed our drink order. Ever since, we have been trying to make our own at home. We think we’ve come up with a pretty great recipe here. You can pickle any vegetables you like using this recipe, just replace the cucumbers…we are fond of pickling our own garlic, and jalapeno. We hope you enjoy, and try it out for yourself.

For the recipe for the Bass Family Dill Pickles...


It is no secret that I LOVE CHOCOLATE!!!! So when I first made these babies, I just about passed out from how good they tasted. This is the simplest recipe and yet has been one of our “go to” desserts for many functions. We have made these for Christmas, for our son’s classroom parties, for church potlucks, birthday parties, and more…. Let’s just say there are NEVER any leftover to bring back home….


Step 2: Break off individual cookies, and place them inside of a silicone mini muffin baking dish. One that fits 24, or 2 that fit twelve.


Step 3: Bake for about 10 minutes. (You want them slightly undercooked)


Step 4: Immediately place Chocolate Peanut Butter cups into the baked cookie, and gently press it inside.


Step 5: Let sit for about 10 minutes then pop out of silicone dish.

So, to let everyone know, we are working on more videos!  Right now we have 6 more in work...still have to edit them and post them.  But in the meanwhile, here is another recipe...the Bass Family BBQ Sauce:


Well, then, what can I say, we love barbecue (BBQ, barbeque, bar-b-que)!  I travel a lot around the country and get to sample different food in different places and BBQ is definitely different from region to region.  I tend to like a combination of vinegar and tomato based sauces, so that’s what ours is.  We like to smoke ribs (which is another recipe for later) and like them dry or wet.  We also do pulled pork, check and beef (all for another time) and we use the same recipe for the sauce for all of it.  The only real variation is the heat and sweet that gets added (for the kids in mind).  There are a thousand different ways of doing these types of sauces, this is one that we’ve settled on that we like a lot!  There are a lot of ingredients, but that’s typical of BBQ sauces.  I hope you enjoy!

For the recipe for the Bass Family BBQ Sauce... 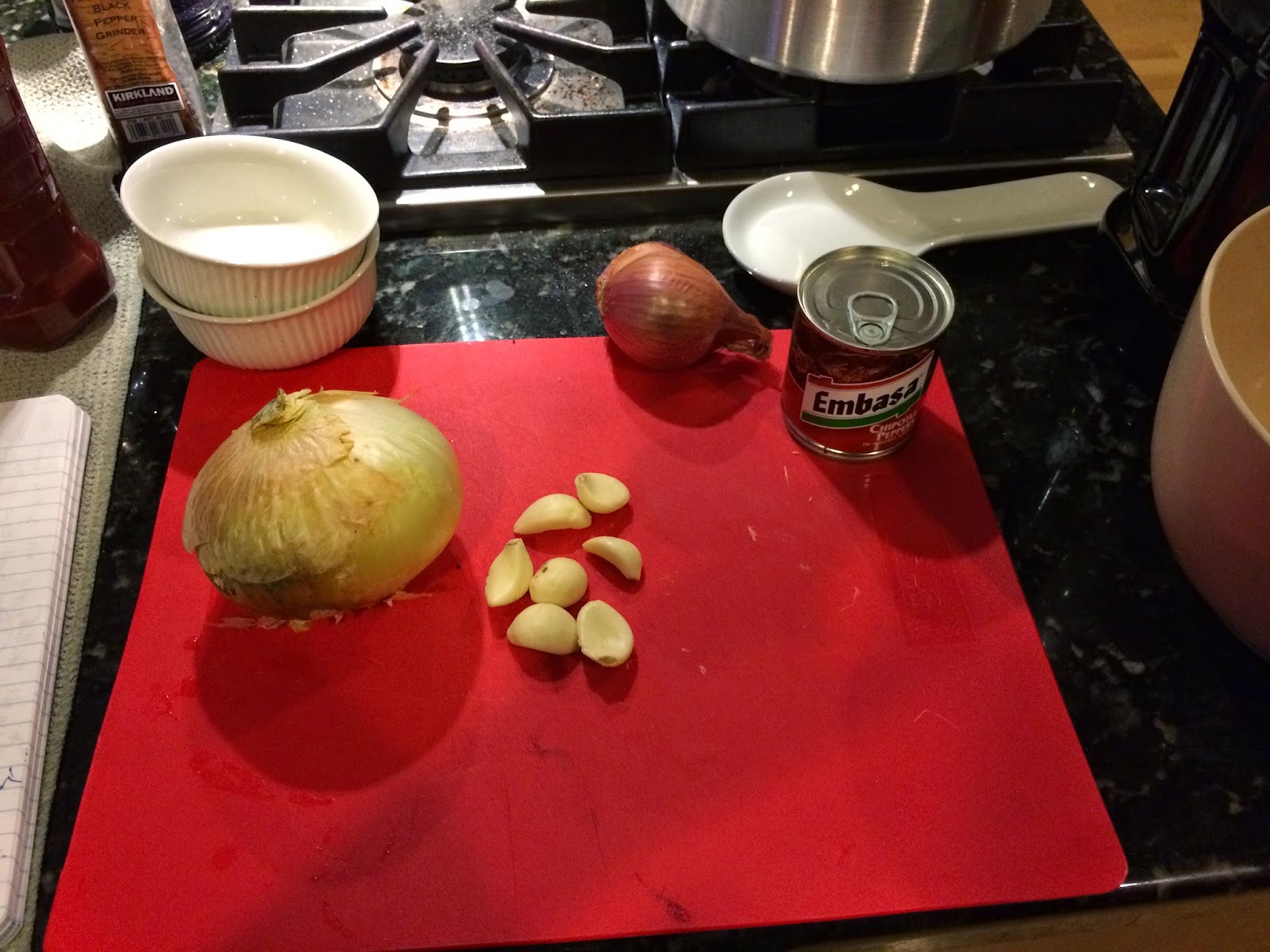 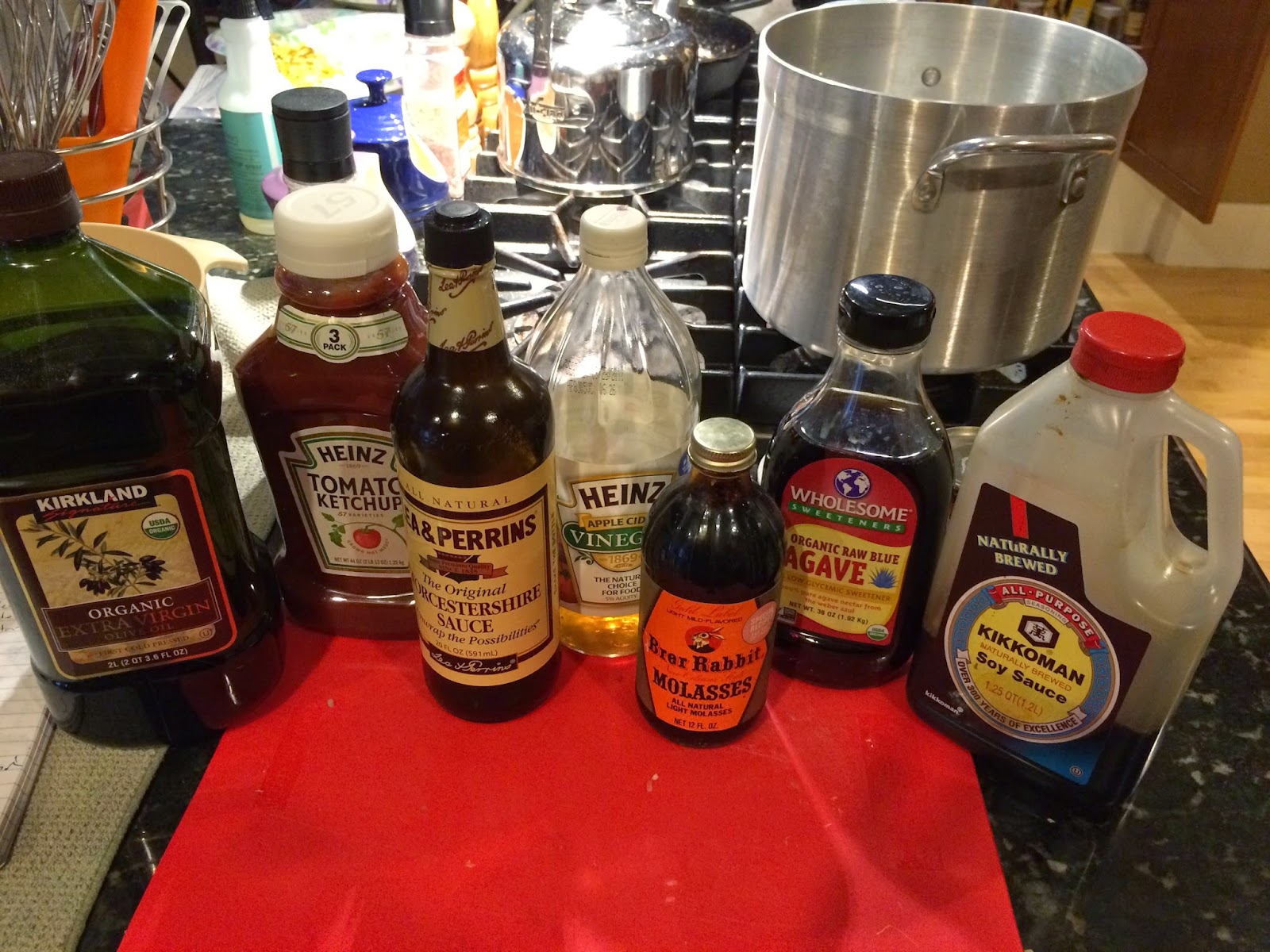 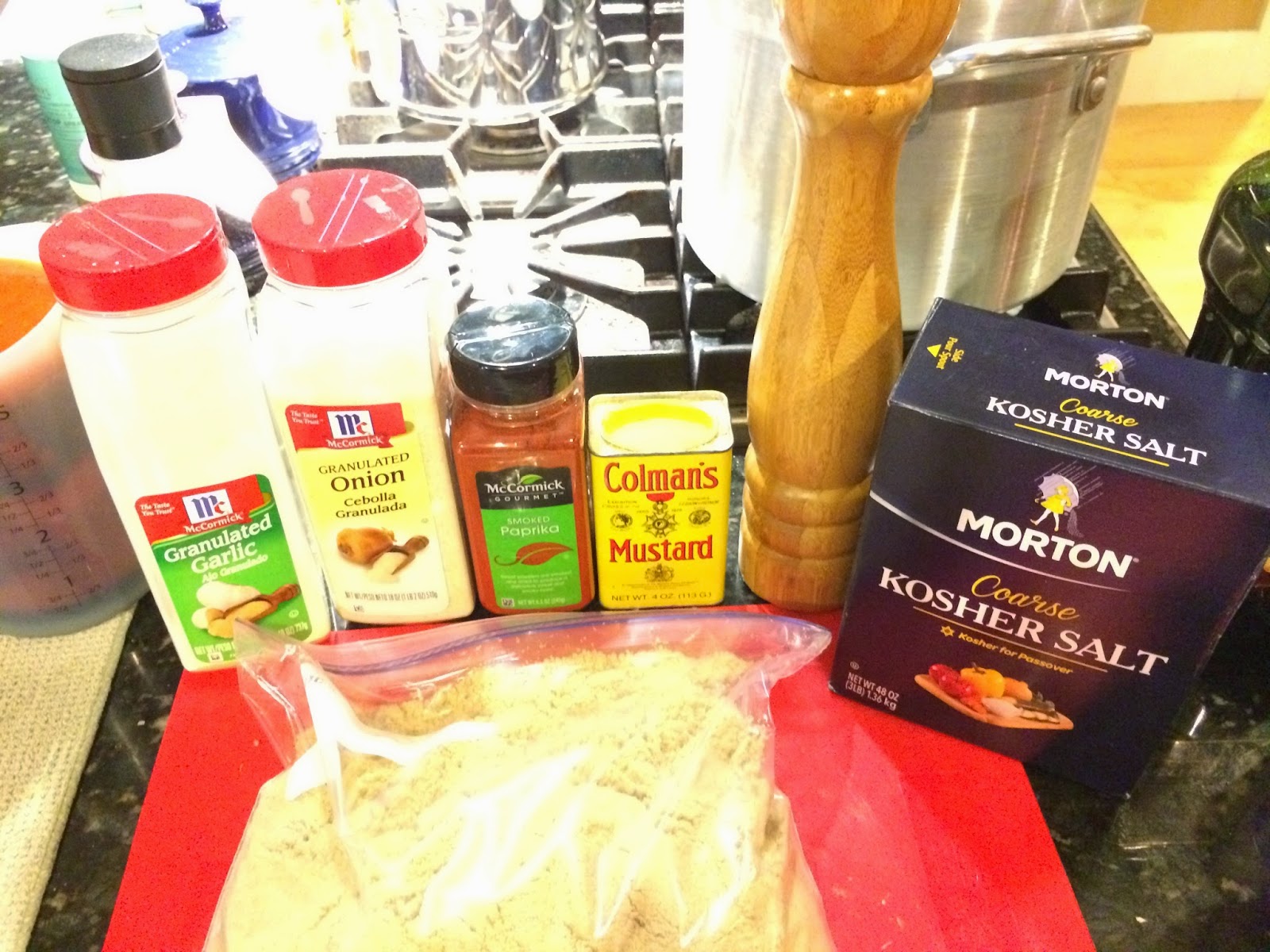 After it's been cooked and reduced a bit... 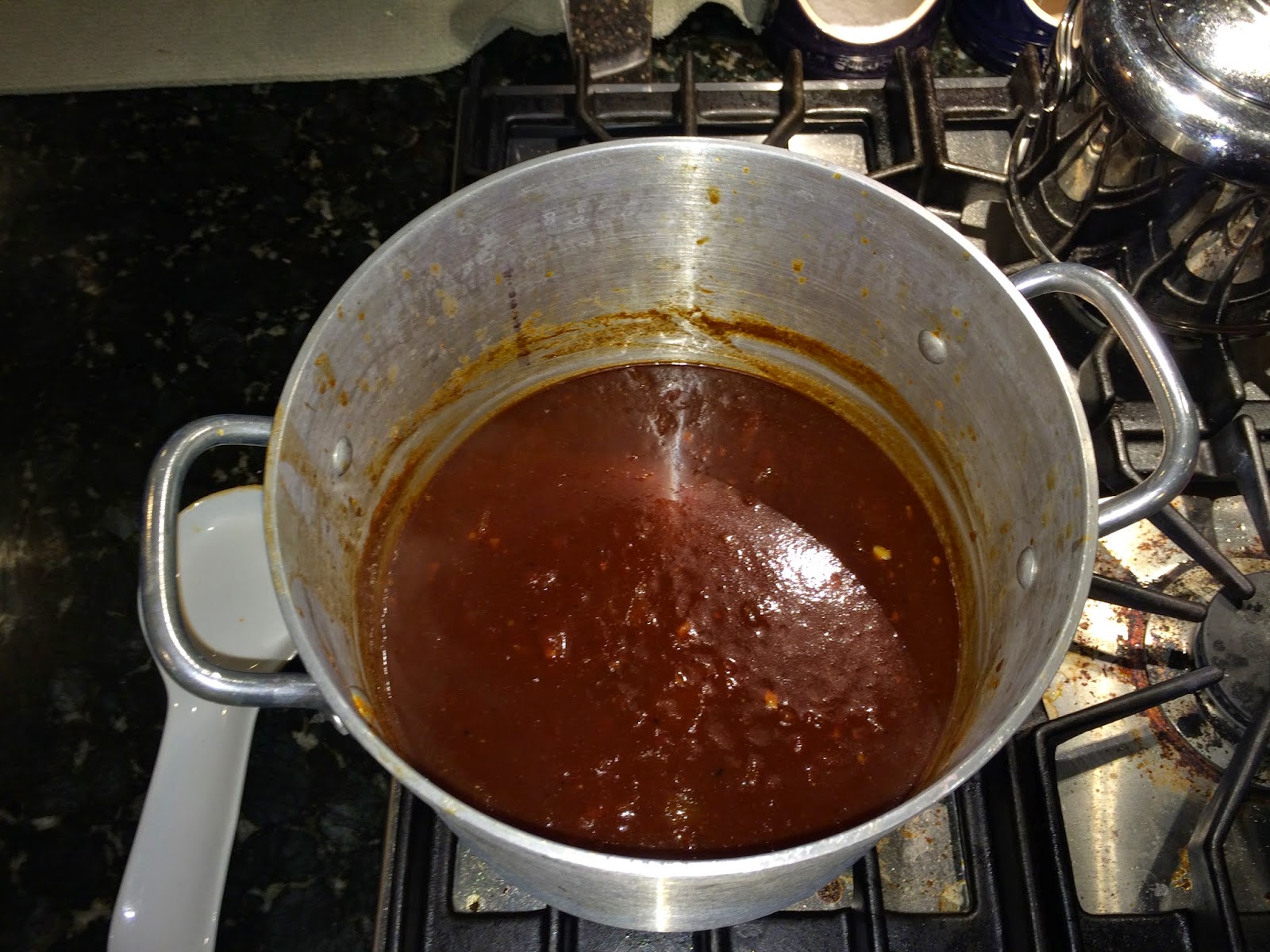 Check out the recipe for more pictures and instructions...I hope you enjoy the sauce.﻿

Posted by Unknown at 3:13 PM No comments:

Even though we never go a day without saying the words "I Love You"; my hubby and I love having a special day to celebrate our love for each other. One way we show our love is through food. We've developed a passion for cooking together, and for those we love. This dinner is inspired by experiences we have shared together. For instance the salad and dessert are inspired by our trip to France, and the entrée is inspired by our trips to the islands.

For the link to our video of our Valentine's Day Dinner:

Yo Momma!©® is a twist on the Cayman Momma and the Bahama Momma.  It is a variation that I created to counteract the boredom on Cayman Brac (being a non-diver, there is nothing else to do then drink on the very small island).  Careful, this drink will sneak up on you and grab you by the poo poo, only two are recommended by the management  :-)

For the link to the video:


For the complete recipe...
Posted by Unknown at 10:03 PM No comments:

A quick story. When I was growing up I used to HATE onions with a capital H! If I even saw onions in a dish I would not touch it, whether I could taste them or not. It wasn’t until I stepped out of my comfort zone at the ripe old age of nineteen at Mimi’s Café, in Anaheim California right next to Disneyland that I tried my very first bowl of French Onion Soup…. From the first bite I was HOOKED!! Let’s just say my hate for onions has since disappeared, and I have grown a LOVE for the vegetable. To this day French Onion Soup is, and always will be one of my favorite dishes. Our version of this soup is based off of Julia Childs famous French Onion Soup, with a Bass Family twist.
Here is the link to our video:
For the complete recipe...
Posted by Unknown at 9:52 PM No comments:

Our first video and recipe!!!

Well, it's happened, our first video is posted (along with 3 others).  The first is for Beef Stock.
Stock is one of the staples you have to have to make soups and sauces.  A few years ago, we decided to try and make our own.  So here is the link to the YouTube video:

For the complete recipe...
Posted by Unknown at 9:41 PM No comments:

So, it's been a fun filled few weeks around the house...I've been home now for a while, which hasn't happened for a long time.  We've been cooking, filming and editing up a storm.  Trying to get the process down. 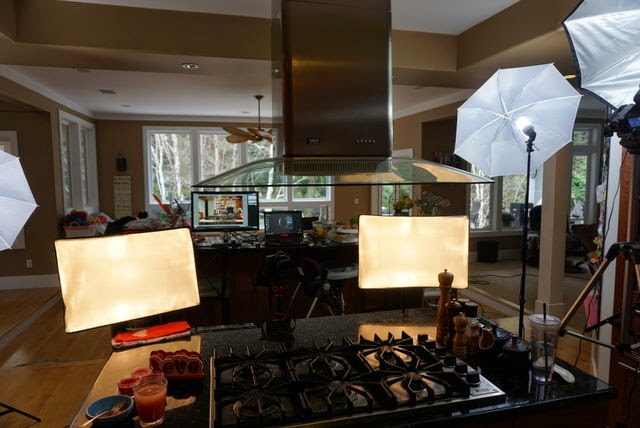 We're ready to post some of our first attempts.  We're also going to be re-posting recipes that were on one of my other sites as well...we will be filming those later.  Hope you enjoy.
Posted by Unknown at 12:56 PM No comments: